Posted by Kerikeri Gamer at 17:18 No comments:

The Battle of Marsaglia

It is about 9 months since I posted anything here. Work, play and continuing exploration of New Zealand has kept me busy.

But anyway, today I am about to embark upon a game based upon the battle Marsaglia. This was a battle in the Nine Years' War, fought in Italy on 4 October 1693, between the French army of Marshal Nicolas Catinat and the army of the Grand Alliance under Duke Victor Amadeus II of Savoy. Wikipedia - Battle of Marsaglia

I have used the map below and the OOBs listed on the Nafziger site linked below:


For the game I have given the French 30 units of foot and 25 units of horse, this is split into 2 lines:

The Grand Alliance army has 33 units of foot and 18 units of horse, this is also split into 2 lines: 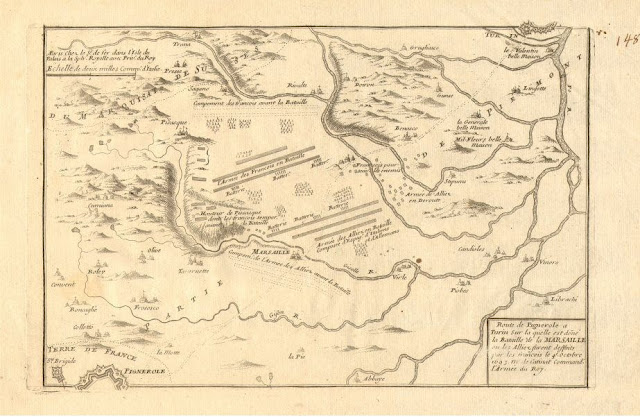 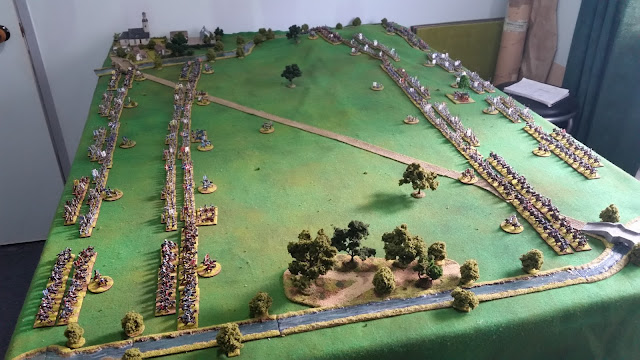 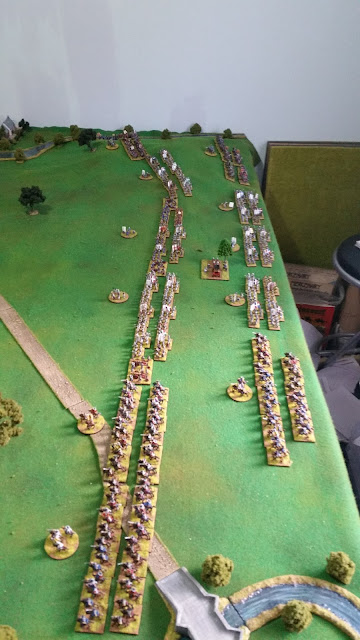 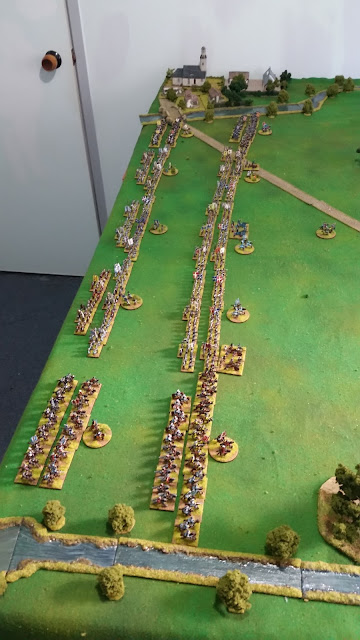 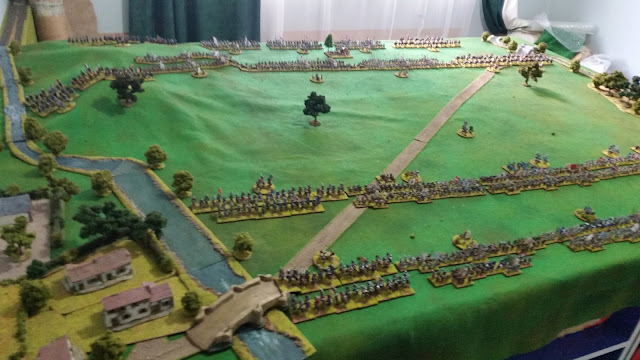 It is now August 2017, it has taken me an age to get round to updating this page. I had played the game over two days during the Christmas holidays in 2016.

The battle panned out in pretty much the same way as the real one had done, with a French victory.

I used Warlord Games Pike and Shotte rules, I find they give a quick, fun game.

Some photos from the game: 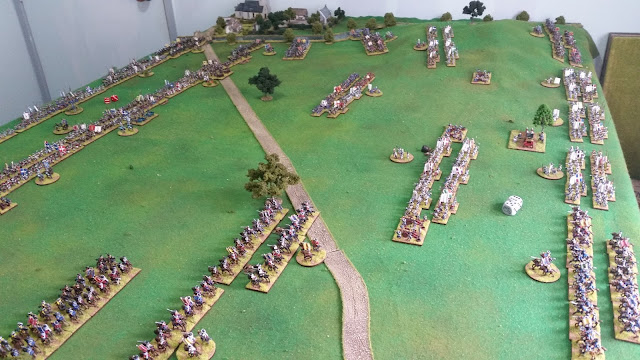 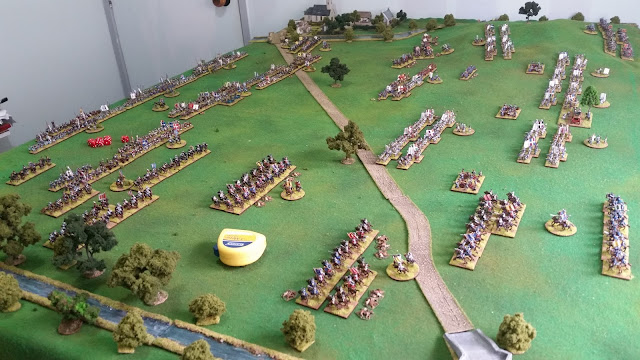 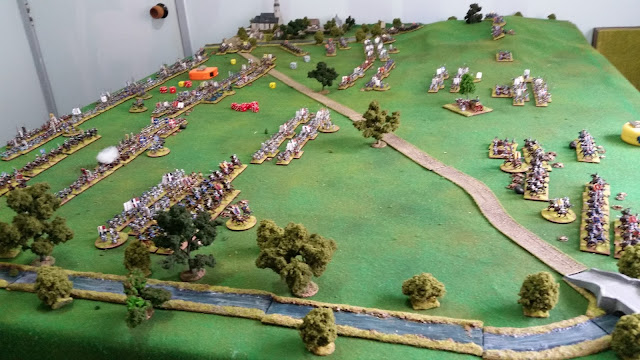 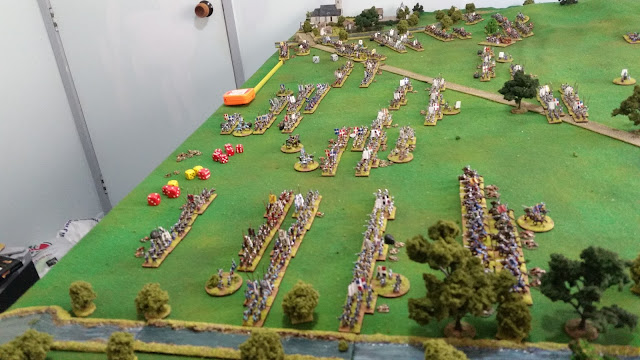 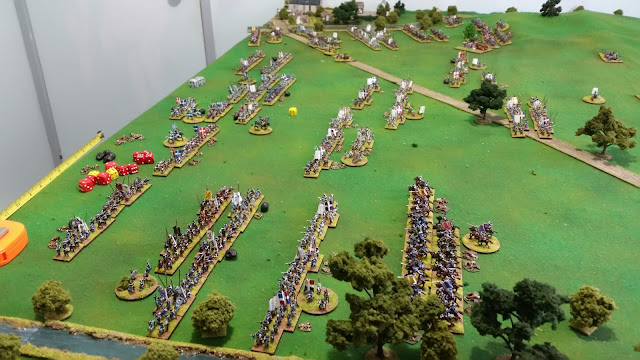 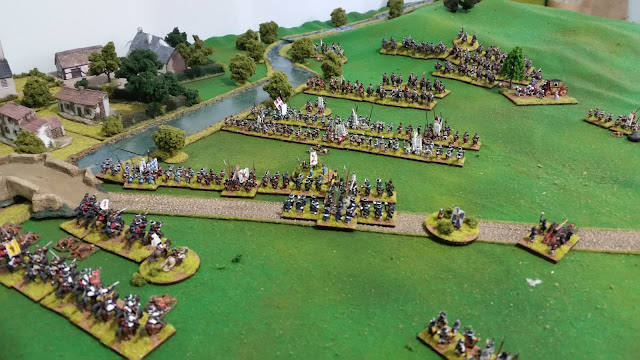 I played this game back in February but have only just got round to writing it up.

After the battle fought a fews days earlier both sides licked their wounds and planned their next actions.

James was 1st to act, the desertions from his army had slowed following his victory but he was still losing some commanders, with 4 senior commanders slipping away after the battle. Although after James' earlier victory the rank and file troops were now unsure if William could now win and were reluctant to act.

James had received news of a revolt in Wales in support of William, but this had not filtered down to the troops yet. Which is why he decided to attack William, before the news from Wales could have any impact upon  his army.

I reflected the desertions of James' officers in the game by reducing the CV of their replacements by 1 from 8 down to 7. Losses to morale were reduced by 2 so some units were starting with hits on them. Units that had routed off the table started as shaken, in retrospect I think this was too harsh perhaps 2 hits would have been better..

James' army is on the right side of the table. William secured his left flank by occupying a small manor with one foot brigade supported by cavalry, hoping to draw James into an attack on the manor which would negate his numerical disadvantage. 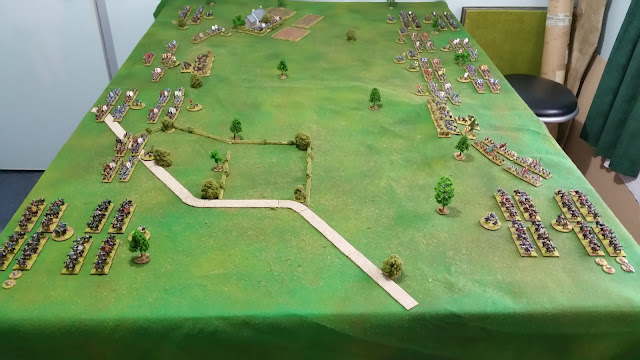 William moved first and advanced his infantry to line the hedges alongside the road, unfortunately the ground was a bit heavy going and the troops made slow progress through the fields. Confusion reigned on William's right flank with one brigade of horse misinterpreting their orders and heading back to the camp (a blunder on the very 1st command roll of the game). 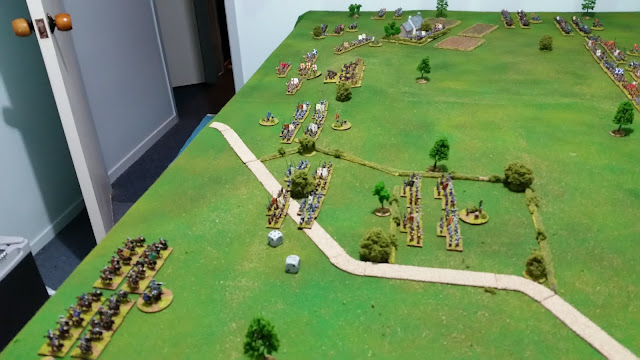 James troops were slow in moving forward surrendering initiative to William. One of the central foot brigades of William were in a hurry to get to grips and advanced far further than they were ordered to (another blunder rolled). 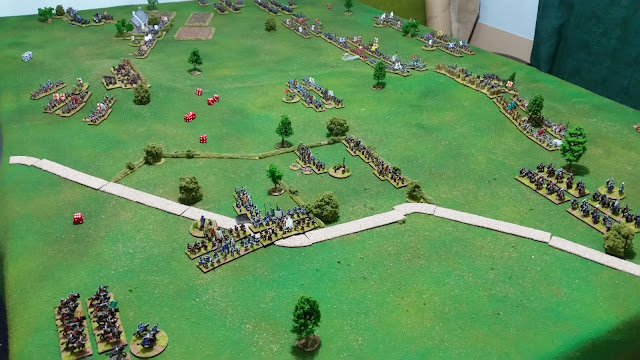 On the left flank the horse, still weakened from the previous battle moved to cover the gap to the left of the manor house as James' force advanced. James had committed 3 brigades to this attack which evened up the odds slightly on the rest of the field, as William had hoped. 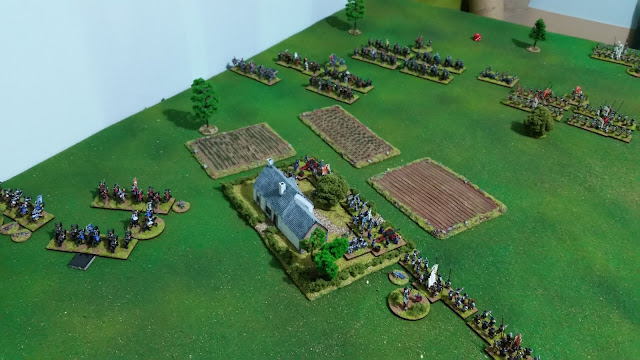 James commits his right flank to the attack on William's horse. 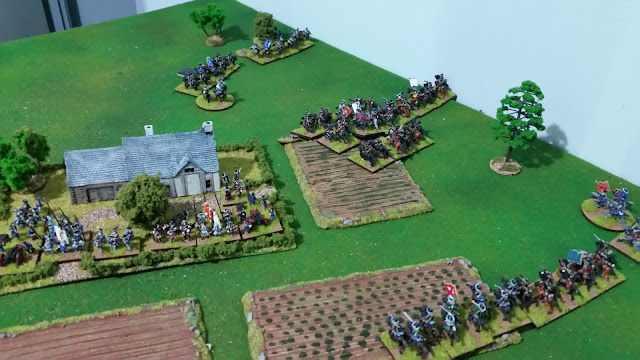 James' horse are successful in pushing back William's troops, as James sends a second foot brigade supported by light guns to join the fight on his right flank, thus leaving an even match on the rest of the field. 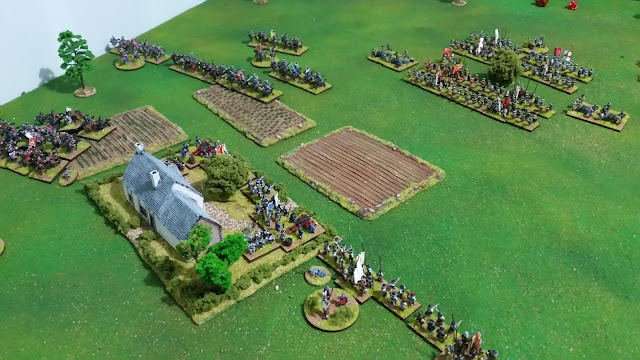 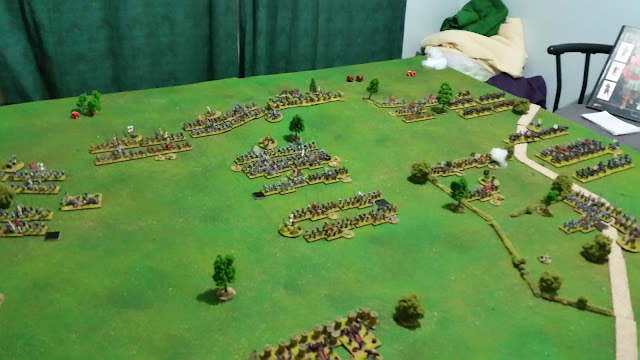 With William's horse on his left flank destroyed James' horse redeploy to take advantage of the situation. 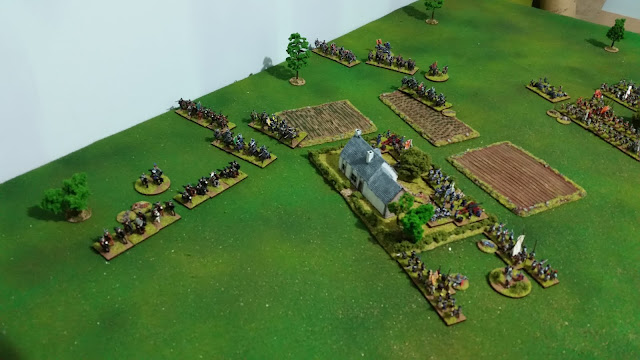 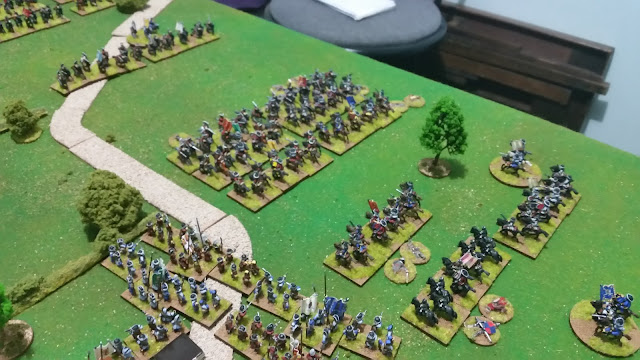 The brigade of horse returning from their visit back to the camp just in time to shore up William's right flank (3 failed command rolls to get back on the table after the blunder).
James'  feeling confident the battle is going his way commits a foot brigade to the fray as well. 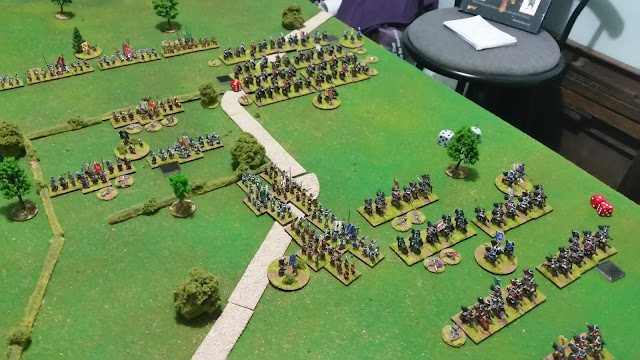 In the centre the infantry battle hots up with both sides committing more troops to the fray. 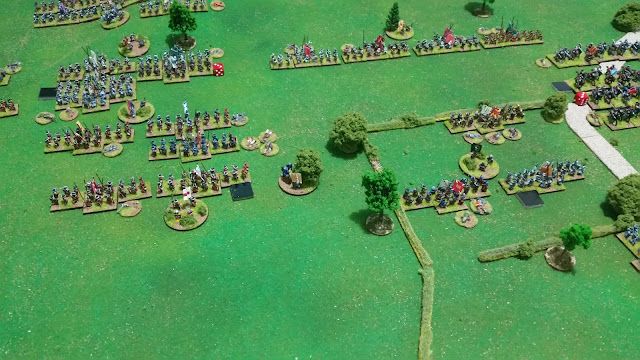 Despite destroying nearly an entire brigade of James' foot by their firepower William's foot brigade holding the manor is now badly shaken and all looks lost for them. They occupied 3 brigades of James troops for 6 turns giving the rest of William's army the opportunity for an even fight. 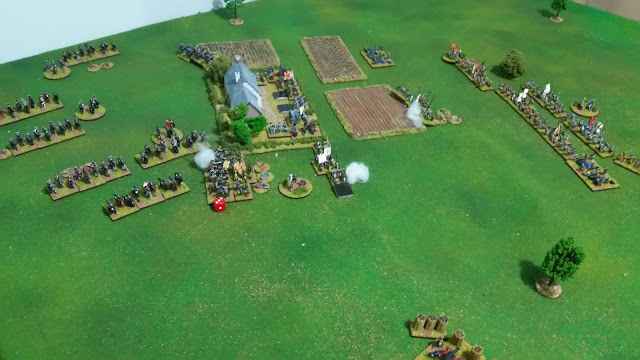 Disaster in the combat in the centre for William, the dice gods had deserted him. James' foot were successful in pushing back William's main thrust. 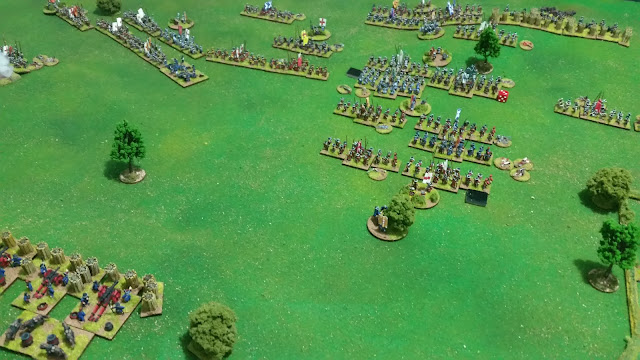 The end of the battle, William with his left flank and centre beaten orders a withdrawal. The victory belongs to KIng James. Is this the end or just the beginning of a new English Civil War? 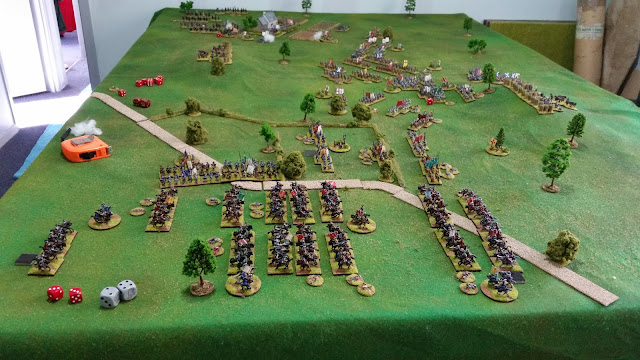 It is November 1688 and William of Orange has landed in Devon at the head of a Dutch army. His aim is to depose the King of England, Scotland and Ireland and place his wife, James' daughter Mary on the throne. That is the history, here I diverge. Rather than indecision and eventually fleeing, James has decided to fight. He has lost some troops and a few commanders, but many are waiting to see who is going to win before nailing their colours to anyones mast.

William is hoping that English commanders and troops will come over to him, and that James' unpopularity will benefit him. William is marching slowly towards London, hoping to put pressure on King James.

Heading further east William finds that King James has garrisoned a small town on an important crossing point on his path to London. William has had reports from his spies that James' army is 2 days march away so he chooses to attack...

Kerikeri Gamer
A recent migrant to New Zealand originally from Yorkshire. Emigrating after a lengthy spell in London. I plan to use this blog to show off my models, and to ramble on about wargame related issues.